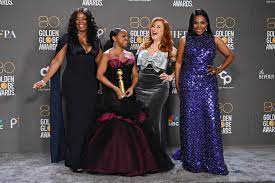 From Gen-z’s first idol walking the red carpet to India winning the best song of the year and making history to Rihanna being the talk of the event because of her surreal looks. The 80th annual Golden Globe awards mark the beginning of the awards season in Hollywood. This time the theme of the event was “the nineties”. Celebs tried their best to make a statement on January 10 at the Beverly Hilton in Los Angeles, California. Here are the top five best-dressed stars from the special night.

The Wednesday star was nominated in the category for Best Actress in a Television Series — Musical or Comedy. This was quite special for her as it was her first nominee for a trophy. She looked like a complete goddess when she wore a Gucci gown with cutouts. The attire was complemented with thin dainty jewellery and some nude lips. The rings and messy hair were an added element.

Selene received an immense amount of love from her fandom when her name was announced on the nominee list. The actress is nominated in the same category as Jenna for her show. This is her first globe nominee and she did not disappoint with her fashion game. She wore a black velvet Valentino gown with puffy eggplant colour sleeves. The sleeves had a long trail. The rare beauty founder rocked a sleek ponytail with open strappy heels. She was one of the best from the lot and adored for her traditional choice for the awards.

Sherly gave all credit to her daughter for curating all the dresses for her. And she completely slayed the fashion game. The list of firsts is never-ending, let’s add another name Sheryl to the list. She exhibited complete royalty in her blue sequence dress. The gown took more than 960 hours to be completed and rightfully every second was worth it. She let her hair down and paired it with blue stone silver earrings.

The mighty queen arrived a little late though but did not leave any stone unturned to add that dramatic glamour to the evening. Her outfit, hair, awards, everything is the talk of the town. She was the showstopper and shined like the brightest diamond. She made her debut in her true style. She wore a ballgown with a drop diamond necklace by Cartier. This monochrome suit by Bottega Veneta included a wool and stain jacket paired with a chunky clutch. The Fenty Beauty founder supported a clean and refreshed look.

Julia stunned in a pink Ballerina dress. She usually chooses darker colours on red carpets. But this time she went out of the box and wore a bright colour. The actress wore a light pink gown with a crystal overlayer to the awards. The dress had more than two layers of fabric underneath which made it look like a mermaid dress. The fabric on the dress is placed like three tiers on the dress, the crystal layer hanging from the straps to the bottom on the waist gives it a corset effect. Her makeup was neutral and for the hair, she styled it in a pixie cut.